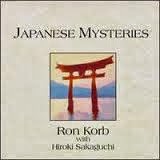 Ron Korb with Hiroki Sakaguchi
Label: Humble Dragon/1993/ OASCD 1008
Genre: World Music/Asian/Japanese Music
Recorded in Tokyo and Osaka Japan, Japanese Mysteries is the result of Ron's extensive studies of Japanese music in which he unveils the mysteries of this fascinating culture. This CD features two tracks with traditional Japanese music (Heavenly Music and Winter Night) and 6 original Ron Korb Japanese music compositions. Each track is about a unique aspect of Japanese history or folklore that is described in the CD liner notes. Traditional Japanese instruments like the koto, shakuhachi, shinobue, ryuteki, and shamisen are blended beautifully with keyboards and acoustic instruments. This album was number 1 on the HMV's New Age chart and is featured on RADIO nuages radio station via the Internet.