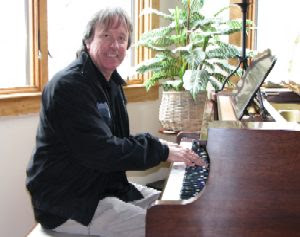 Wayne Gratz delivered one elegant new age-inflected, quiet piano album after another, each with a different mood and accompanying theme. Gratz’s presence on the Narada roster gave him substantial equity in terms of name recognition, helping him become one of the more recognized and best-selling artists working within his niche. Born in Winston Salem, North Carolina, in June of 1954, Wayne acquired his love for music at a early age. At the age of five, Wayne moved to Reading, Pennsylvania. Inspired by his kindergarten teacher, Wayne began playing the piano at age six and studied piano into his high school years. He then began studying guitar. With the onset of cool keyboard bands such as Emerson, Lake and Palmer, Yes, and Genesis, Wayne decided to return to the keyboards.