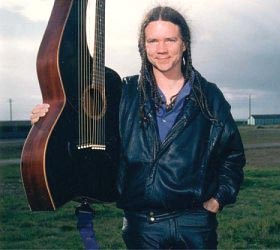 's BREAKFAST IN THE FIELD is a stunningly gorgeous debut, and it's as serene and pastoral as its title implies. On this 1981 album (produced by William Ackerman for his renowned Windham Hill label), the virtuoso acoustic guitarist makes an immediate impression, garnering attention with his deft fretwork, inventive compositions, and uncanny sense of both melody and harmony.

Although pianist George Winston and bassist Michael Manring make notable appearances (the latter musician is particularly prominent on "The Funky Avocado"), this record's finest moments are when Hedges is playing solo, as on the lilting "Layover," the dreamy title track, the nimble "Peg Leg Speed King," and the highly percussive "Silent Anticipations." While Hedges often gets unfairly relegated to the New Age category (especially due to the easy-listening reputation of Windham Hill), this initial outing reveals that the late performer had talent that defied easy genre identifications.