Darol Anger is an American violinist, born in 1953. 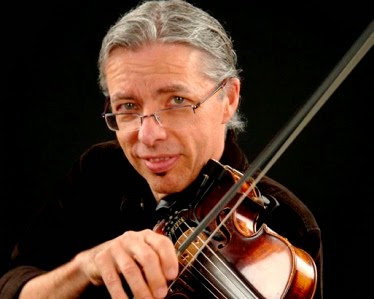 Darol Anger entered popular music at the age of 21 as a founding member of The David Grisman Quintet. Anger played fiddle to David Grisman's mandolin in The David Grisman Quintet's (DGQ) 1977 debut. He co-founded the Turtle Island String Quartet with David Balakrishnan in 1985 and performed, composed, and arranged for the chamber jazz group. He frequently collaborates with fellow DGQ alumnus Mike Marshall. Anger met pianist Barbara Higbie in Paris and formed a musical partnership with her. Together they released an early record on Windham Hill, Tideline (1982). Two years later, they formed a group called The Darol Anger/Barbara Higbie Quintet with Mike Marshall, Todd Phillips, and Andy Narell. This group performed at the 1984 Montreux Jazz Festival.