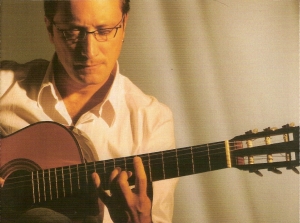 Brazilian guitarist Ulisses Rocha has made a name for himself not only as a musician, but also as a composer, arranger, and educator. His style is very unique. His music is harmonically sophisticated, technically challenging and usually easy on the ear. As diversified as his early influences, his career has followed an interesting path. He has arranged recordings for many Brazilian singers. He was also part of the Grupo D'Alma in the 70's, a guitar trio that is said to have influenced Al diMeola, John McLaughlin and Paco de Lucia to start playing together. His recordings are very eclectic and not tied to the Brazilian tradition of Choros and other musical genres forged on the guitar over the last 100 years. Instead, Ulisses and other musicians of his generation were also influenced by pop music which has translated in a rich addition to Brazilian music for the guitar.